With only 2 more days before the official draw, Team Canada is getting ready to step into the ring against the best boxers in the world at the 2018 AIBA Women’s World Championships. Organized by AIBA, the #WWCHs2018 are taking place November 15 -24 in New Delhi, India and are welcoming 333 boxers from 73 countries.

Represented by 6 Canadian pugilists, let’s take a closer look at the boxers who will be representing Canada on the world stage:

Sara Haghighat-Joo started boxing at the age of 16 at the Astoria Boxing Club in Vancouver, BC. She initially started because she grew tired of team sports in high school as one of her coaches held told her she would not get much playing time. It is her parents that suggested she try out boxing. At first, she did it for the fitness aspect of the sport, but after only four months of training, her coach taught she was ready to start sparring and that is when she quickly realized she was quite good at boxing. In the short span of four months of sparring, she had her first bout at the BC Golden Gloves Tournament and she won the competition in the Youth division and later on, as an Elite boxer as well. Even since, she never looked back and she moved halfway across the country, away from her hometown and family, to pursue boxing and train with the best. She knows that every decisions she made were the right ones to get to where she hopes to get.

Sara loves the adrenaline rush she gets during competition. Also, since it is an individual sport, she likes that the pressure to perform is on herself. In the next ten years, she wishes to competed at the highest level: the Olympic Games. If it’s not in 2020, she will keep trying for 2024. “I know it’s not an easy goal, but if it was easy, everyone would be there 😉 ”

Sara completed two years of her Undergrad in Human Kinetics. She transferred from University of British Columbia (UBC) to the University of Guelph, but she it currently taking it very slowly as she is currently training full-time for boxing. She would like to become an Athletic Therapist.

TYPICAL PRE-BOUT MEAL : Oatmeal with a bowl of fruits and coffee

PLACES TO VISIT IN HER LIFE : Thailand

FUN FACT THAT FEW PEOPLE KNOW ABOUT HER : I played violin from the ages 8 to 12

LIFE & CAREER OBJECTIVES : Eventually, when she finishes her schooling, she would like to become an Athletic Therapist. All my life, I suffered from a lot of injuries and I want to be able to give back and share the knowledge about whatI went through as an athlete and how to overcome these injuries.

Sabrina Aubin made her boxing debut at the age of 21 after seeing the movie “Million Dollar Baby”. At the time, Sabrina had been playing basketball for nine years, but a knee injury prevented her from pursuing the sport further. She then decided to set a new sport objective and the movie made her want to try boxing, a sport where her knee would not be a problem. She first started out as a recreational member, but rapidly transition toward competition. The technique, the strategy (similar to a chess game) as well as the challenge that boxing represents are her favorite aspect of the sport.

Beyond her boxing accomplishments, Sabrina also obtained her Bachelor degree in Kinesiology at UQAM. In the future, she wishes to continue practicing boxing for fun, be a coach and spread her passion for her sport.

PLACE TO VISIT IN HER LIFE : Everywhere I’ve never been! 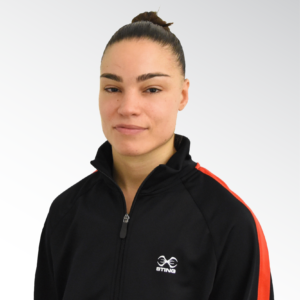 Originally from Paris, Caroline Veyre immigrated to Canada in 2003 after visiting the country a few years earlier as her mother came to Montreal for cancer treatment. She first started boxing when she was 18 years old. Throughout her teenage years, boxing allowed her to grow as a person and gain confidence as she had difficulties to express herself at the time. According to her, sports enables you to develop great qualities that you can apply to all aspects of your life, such as discipline, sense of organization, determination, confidence, perseverance and optimism in order to tackle life and forge ahead!

During her very first Canadian championships in 2009, Caroline earned the bronze medal and grabbed the silver medal at 2012 edition of the same championships. In 2013-2014, she won the National title for two consecutive years. During the same year, she also participated in her first Continental Championships where she claimed the bronze medal and also repeated her performance the following year. One of her career highlight occurred when she grabbed the gold medal during the 2015 Pan Am Games in Toronto.

Beside her career as an athlete, Caroline also obtained her bachelor degree in translation. She plans to continue boxing for a few more years. Her dream is to participate in the Olympic Games and earn a medal. In the next few years, she would like to open her own boxing gym and become a coach.

FAVORITE MOTTO :  ”It is difficult to beat someone that never quits.”

FAMILY : She has a twin sister

PLACE TO VISIT IN HER LIFE : Brazil

Myriam Da Silva started her athletic career in soccer. She was 10 years old when she signed up for soccer practice and by age 12, she was an elite player. She played soccer for a decade and had intentions of making the national Olympic team. Unfortunately, this was not possible due to some injuries. She wanted to change sports and signed up for a cardio-boxing class in her university. She immediately grew a liking for it, because it demanded a high level of concentration. Randomly, a boxing trainer walked into the store where she was working at the time to shop and asked her if she ever considered trying competitive boxing. At first, Myriam was hesitant. After two weeks of contemplating, she signed up at a boxing club and six months later, she made her in-ring debut.

In the beginning, boxing attracted her because of its intensity, which is something her ego needs. Also, her mother was always proud of women who accomplished unexpected things. In a newspaper, they found her current boxing coach, Danielle Bouchard, which they found to be a role model. She became serious about boxing but did not tell her parents in the beginning. She told her parents after her first Silver Gloves competition. Her love for boxing was growing at a rapid pace as aspects such as concentration, physical performance, tactics, and techniques made her want to improve. For her, boxing is not a violent sport. It’s about discipline and that is what she instills to the young boxers.

Myriam sees herself becoming an elite boxer and her dream is to compete in the Olympics. In addition to her boxing ambitions, she also has a Bachelor’s degree in school and social adaptation from UQAM.

FAVORITE MUSIC : It depends on the mood

OTHER SPORTS & HOBBIES : Running, functional training, activities that take you out of your comfort zone

PLACE TO VISIT IN HER LIFE : Too many places to list them all!

Tammara Thibeault was only 10 years old when she started boxing. Originally, it was an activity that her older brother and father were doing together for fun, but eventually, she ended up going with them on a regular basis. When her brother quit the sport, she stuck to it and never looked back since! At first, she wanted to try boxing because her father is her greatest source of inspiration and she wanted to be just like him. Over the years, she developed a true passion for the sport. She wasn’t very good at other sport and for once, she was told she had potential for her chosen combat sport, which motivated her to become the best she could be. Boxing has taught her the importance of patience, perseverance and dedication. For a long time, the boxing club was the only place where she felt comfortable enough to truly be herself, hence helping her build her confidence while growing up.

Beside her career as an athlete, Tammara obtained her CEGEP degree and she is currently completing her Bachelor in Linguistics as well as two minors in Mandarin and Spanish. Afterwards, she will pursue her Masters in Business and Administration.

She doesn’t know exactly where she will be in ten years from now, but if she could choose her future, she pictures herself traveling around the world discovering different cultures, languages and taking every opportunity that present itself. She would love to teach English, French or even Spanish in another country, preferably somewhere warm by the beach! She would also like to give back to the community and help more deprived communities in South America.

FAVORITE TV SHOWS : Once upon a Time, Games of thrones, Fresh prince of Bel-Air

FUN FACT THAT FEW PEOPLE KNOW ABOUT HER : I can sing!

LIFE & CAREER OBJECTIVES : I want to start my own international corporation

Marija Curran used to compete heavily in Jiu Jitsu from ages 10 to 18, but it is at the age of 15 that she decided to take boxing lessons to help with her hand game. She was boxing recreationally to help with her sport (Jiu Jitsu) all through high school and university. After her graduate degree, she took up boxing as she wanted to compete in some sort of combat sport again and she was quickly integrated into the competitive program at Beaver Boxing club.

While her initial gravitation towards boxing was a means to an end, to improve her Jiu Jitsu, her continued involvement in the sport is motivated by respect. She has a great respect for classic, traditional sports such as boxing and she loves how her newly adopted sport remained largely true to its origin despite the massive changes in the world around it. It has stood the test of time. Also, she loves how boxing challenges her and she gets to do that every day.

In the next ten years, Marija pictures herself continuing her participation in the sport she loves in a coaching capacity. Ideally, she would like to give back to the sport, and the country, by eventually coaching amateur boxers on the international stage. She would also like to run a boxing program aimed at risk youth, particularly girls, to help them develop confidence and life skills through boxing.

FAVORITE MUSIC : Anything, but metal

TYPICAL PRE-BOUT MEAL : Chicken, rice and salad (Isn’t that what all boxers eat?)

OTHER SPORTS & HOBBIES : I don’t have time for other sports or hobbies. I work, box and then apologize to my friends and family for being so busy when I’m not doing those two things.

PLACES TO VISIT IN HER LIFE : All of Canada’s coasts and various parts of Africa, starting with Egypt.

FUN FACTS THAT FEW PEOPLE KNOW ABOUT HER : I’m the youngest of five children and I have three older brothers that beat me relentlessly growing up

LIFE & CAREER OBJECTIVES : Make enough money that I can pay someone else to clean my house