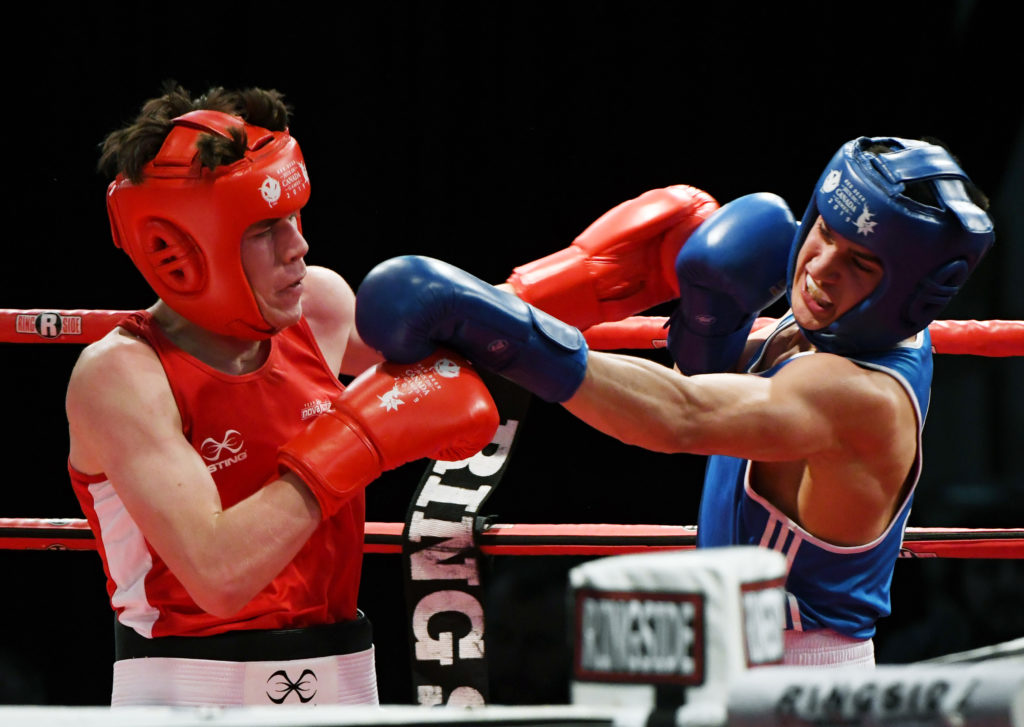 On the third day of the 2019 Canada Winter Games, boxing made its debut in front of a full crowd at Westerner Park in Red Deer, Alberta. With sixteen exciting bouts on opening night, 32 boxers stepped into the ring and gave their all hoping to access semifinals the following day.

With nine provinces in action, Team BC made its presence known by claiming 4 wins out of 4 bouts, cumulating the most victories on day one of the competition.

Here’s an overview of the pugilists’ performance:

With two bouts featured on the schedule, the boxers kicked off the session on a strong note. Jawad Miakhail from Manitoba opened the competition with a unanimous win over Ontario while Matthew Fraser, who is also a Youth National Team boxer, stopped his opponent from Newfoundland during the 1stround. Alberta’s representative, Cole Brander, also advances to the next round after winning by walkover over Parsa Bisheh from British Columbia.

Youth National Team boxer, Avery Martin-Duval from Quebec, will make his debut tomorrow for the first bout of the session.

Brayden Sims (BC), Jad Khabbaz (QC) and Kyle Oliver (AB) all won by a unanimous decision over their counterparts. Justice Harborne from Manitoba is the fourth boxer in the lightweight division to advance to the semifinals tomorrow after winning a 4-1 decision against Ontario.

“I think I performed pretty well and landed some powerful body shots on my opponent, mentioned Justice Harborne in his post-bout interview. I’m looking forward to possibly facing Quebec in the final.”

In the light welterweight category, Ontario’s Mason Galvao and Nova Scotia’s Alex Bulgaru both made a strong first impression in the tournament with convincing victories. The two boxers are set to face each other in semifinals. Sammy Morisset from Quebec and Jerome Leroyer from British Columbia will make their debut tomorrow after obtaining a bye in the first round.

Halfway through the boxing session, Team BC and Team Quebec both added another victory to their result. Indeed, Montreal boxer Christopher Guerrero Zuri won by unanimous decision against Nova Scotia’s Matthew Ross, and Dylan Clark-Erlandson saw his hand raised in a 4-1 decision over Alberta. The two victors are now scheduled to square off tomorrow in the hopes to reach the gold medal bout on Wednesday evening.

“It’s my first Canada Games and I feel so overwhelmed. There are so many athletes and spectators; I’m so glad to be here!, stated Quebec’s boxer after his victory. I feel like I could’ve done better, but I will make some adjustments for the next two bouts.”

New Brunswick’s and Ontario’s welterweight boxers will make their entrance in semifinals tomorrow after obtaining a bye today.

Ontario’s and Youth National Team boxer Mohamed Zawadi, BC’s Jonathan Hannah and Alberta’s Janick Lacroix won in impressive fashion during the preliminary round of the middleweight weight category, and will be joining Matthew MacDonald (NS) in semifinals.

“I came out strong and I feel really good about my performance tonight, stated Alberta’s Janick Lacroix after his convincing win during the first round in front of the local crowd cheering for him. I’ve worked hard to get here and now I have semifinals tomorrow.”

The action didn’t slow as the light heavyweight athletes got in the ring. Filled by powerful punches, all three bouts in the 81 kg category were stopped by the referee. Ontario’s Tiago Balteiro, BC’s Brayden Marking-Hellekson and New Brunswick’s Isaiah Haya are now one step closer to the podium as they advance to the semifinals on Day 2.

As for the boxers who lost in the first round of the tournament, it is not the end of the road on their pursuit to step on the podium! With a double elimination format, they will still have the opportunity to redeem themselves over the next two days and compete for the bronze medal.

With 17 bouts scheduled on Monday evening, the second day promises yet another action-packed session as boxers will square off in the hopes of reaching the gold medal bout. Moreover, seven boxers will make their debut on Day 2 of the competition after obtaining a bye in the first round of the tournament.

For more information regarding the boxing competition, consult the 2019 Canada Games’ official website or Boxing Canada’s event page for all details.