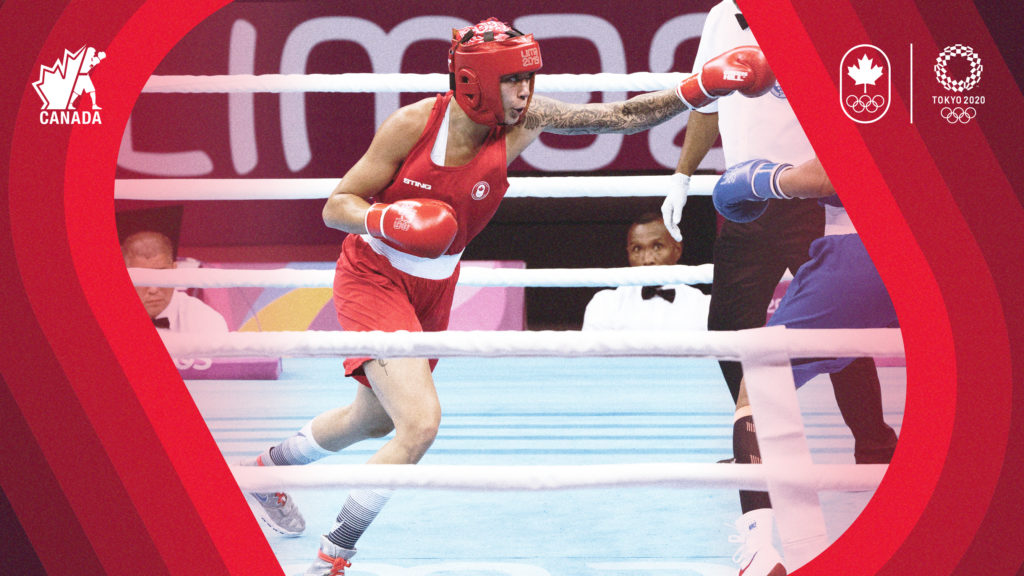 Five boxers (four women and one man) have qualified for Team Canada. Tammara Thibeault, Myriam Da Silva, Caroline Veyre and Wyatt Sanford qualified via their world rankings based on competitions in 2018 and 2019, as per the IOC Boxing Task Force’s criteria for selection. These four boxers will be making their Olympic debuts. The fifth boxer, Mandy Bujold, who was pregnant and postpartum during the qualification period, qualified after an appeal was granted by the Court of Arbitration for Sport.

The four women on the Tokyo 2020 team are the most for Team Canada since women’s boxing was introduced at the London 2012 Olympic Games.

Thibeault (Shawinigan, Que.) will be competing in the middleweight (75kg) category. She is a Lima 2019 Pan American Games silver medallist after her bronze medal was upgraded following a competitor’s anti-doping rule violation. She won gold medals at the 2020 and 2019 editions of the Copa Independencia in the Dominican and a bronze medal at both the 2019 AIBA World Championships and the 2018 Commonwealth Games.

“This has been a long time coming,” said Thibeault. “I am excited for this next step. I am very close to accomplishing my lifelong dream and I’m very grateful for all the time and effort that everyone has put into this journey. We’re aiming to make history in Tokyo!”

Da Silva (Chambly, Que.) and Veyre (Montreal, Que.) will be representing Canada in the welterweight (69kg) and featherweight (57kg) categories, respectively. Tokyo 2020 will be the first time that both of these weight categories are included in the women’s Olympic program.

“Being a boxer since 2007, I am excited and especially proud to take part in the first Olympic edition of the women’s welterweight,” said Myriam Da Silva. “This addition is an important advancement for girls in the sport and I am proud to be part of this group to continue advancing women’s boxing.”

Veyre made her international debut at the 2013 Continental Championships, where she won a bronze medal, a result she would repeat the following year before winning a silver medal in 2017. Since then, she has won gold at the 2015 Pan American Games and the Copa Independencia and silver at the 2019 Balkan International Tournament.

“I have dreamed of this moment for so long,” expressed Veyre. “There is no greater accomplishment for an athlete.”

Bujold (Kitchener, Ont.) will represent Canada at her second Olympic Games in the flyweight (51kg) category, becoming the first Canadian female boxer to make an appearance in consecutive Games. An 11-time Canadian champion, Mandy will look to improve on her fifth-place finish at Rio 2016, where an illness hindered her in her quarterfinal match. Among her many international achievements, her most notable results include gold medals at both the 2011 and 2015 Pan American Games and a bronze medal at the 2014 Commonwealth Games.

“I am very excited to join Team Canada for my second Olympic Games,” said Bujold. “I am ready and looking forward to showcasing my skills on the biggest stage.”

Sanford (Kennetcook, N.S.) will be the sole Canadian man to represent Canada in boxing, competing in the welterweight (69kg) category. Sanford is the 2018 Canadian Champion and 2019 Canadian Qualification winner. He also won gold at the 2017 Ringside World Championship.

“Boxing may be a solo sport, but it’s the team and the community around us that help us achieve our goals and that have helped me make it to my first Olympic Games,” said Sanford.

Team Canada’s last Olympic boxing medal was a silver from David Defiagbon at Atlanta 1996. The women will be looking to win a first medal for Canada. Their best results have come from Mandy Bujold in 2016 and Mary Spencer in 2012, both having finished in fifth place.

“What an inspiration Mandy Bujold has been to our whole Canadian team – her dedication and persistence to fight for her rights outside the ring matched her incredibly creative training for inside the ring,” said Team Canada’s Tokyo 2020 Chef de Mission, Marnie McBean. “Our first-time Olympic boxers have an incredible leader in their midst. They are all going to be so exciting to watch.”

The athletes and coaches nominated are:

Prior to being named to Team Canada, all nominations are subject to approval by the Canadian Olympic Committee’s Team Selection Committee following its receipt of nominations by all National Sport Organisations.