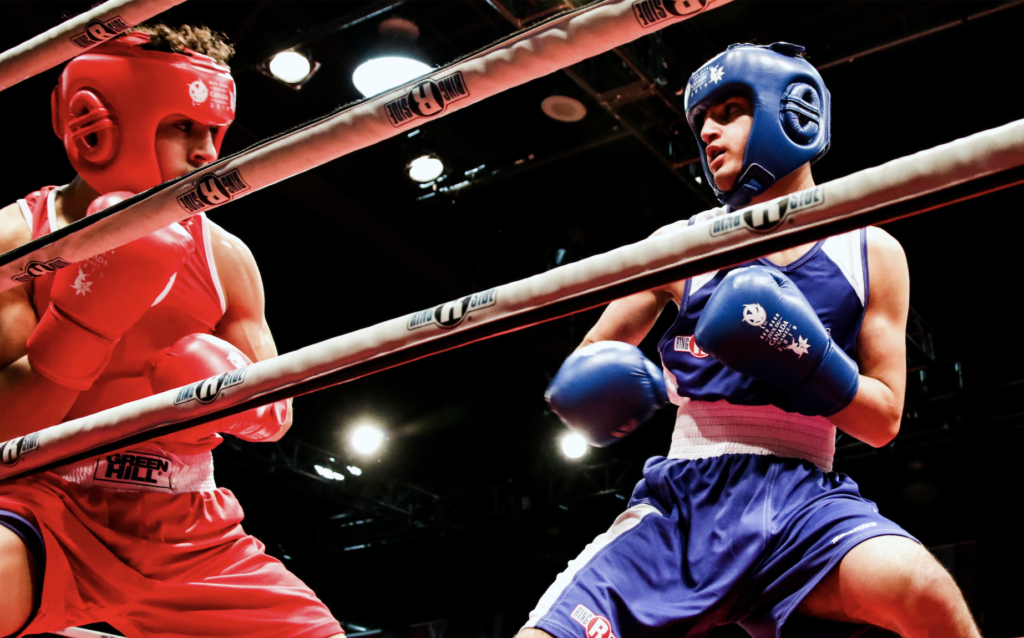 After a much-anticipated return to the Canada Games, the boxing finals has finally arrived after three intense days of competition. The third day of the tournament saw 14 boxers in action to determine who would compete for the bronze medal in their respective categories.

In the bantamweight category, Ontario’s Keeyan Trotman and Manitoba’s Jawad Miakhail faced off for the second time of the competition. Indeed, the two boxers met during the preliminary round of the competition, where Jawad Miakhail won unanimously. In this second faceoff, the southpaw boxer from Winnipeg once again took the win with a 5-0 scorecard and secured his place in the bronze medal final.

Up next was Matthew Fraser (NS) against Carter Butler (NL), who had also met on Day 1 of the competition. In a second-round stoppage, Nova Scotia grabbed the win and advances to the bronze medal bout against Manitoba during the first bout on Wednesday evening.

Only one bout took place in the bronze semifinals for the lightweight category opposing Wayne Ducharme from Saskatchewan to Christopher Lucas Craston from Ontario. In a third-round stoppage, it was the Ottawa boxer that took the win. He moves to the next round of the competition against Alberta’s Kyle Oliver, who won by walkover over Quebec’s Jad Khabbaz due to medical reasons.

British Columbia’s Jerome Leroyer and Ontario’s Mason Galvao went toe-to-toe in the second semifinals of the 64 kg division. After three rounds, it was Mason Galvao who grabbed the win by a unanimous decision of the judges.

“I have a lot of respect for my opponent, he put up a great fight. Everything felt great in the ring, I feel like I could have done better and be more dominant, mentioned the Burlington boxer after his victory. Overall, the Games are really exciting. I’m looking forward to putting on a good performance and going for bronze.”

He will face Nicholas Callahan (NL) in the bronze medal bout, who won against Alberta on Day 2.

There was no welterweight bout during the third day of competition. The first bronze semifinals had taken place the previous day where Matthew Ross (NS) was declared the winner and secured his spot in the bronze medal bout. He will be facing Dylan Clark-Erlandson from British Columbia who won by walkover against Mohamad Hariri (NB) who was unable to box on Tuesday evening.

Both bronze semifinals for the middleweight class were schedule on the Day 3 card. The first bout opposed Manitoba’s Mohammed Makhlouf to Matthew MacDonald from Nova Scotia, and it was Mohammad Makhlouf who was declared the winner by a 5-0 decision. “I feel better than my last fight. I did good and now I’m confident going for the bronze medal,” declared Makhlouf in his post bout interview.

Moving to the bronze final, he will face Jonathan Hannah from British Columbia. The North Vancouver boxer secured his spot in the final with a 5-0 victory against Quebec’s Estéban Nadeau. The two boxers had faced each other during the preliminary round of the tournament, where BC was also declared the winner.

Seamus O’Brien from Newfoundland and Labrador was the first light heavyweight boxer to confirm his spot in the bronze medal bout. Unable to make weight, his semifinals’ opponent, Gabriel Tremblay (QC), lost by walkover.

British Columbia’s Brayden Markin-Hellekson will be opposing him in the bronze medal final, after winning a 4-1 split decision against Quinn Neald from Saskatchewan.

“I’m pretty excited about my performance tonight. I was able to throw a little more punches and keep it tighter, stated the Nelson boxer. “I’m really excited to move to the bronze final.”

Here are the finalists who will fight to determine their place on the podium of their respective categories: