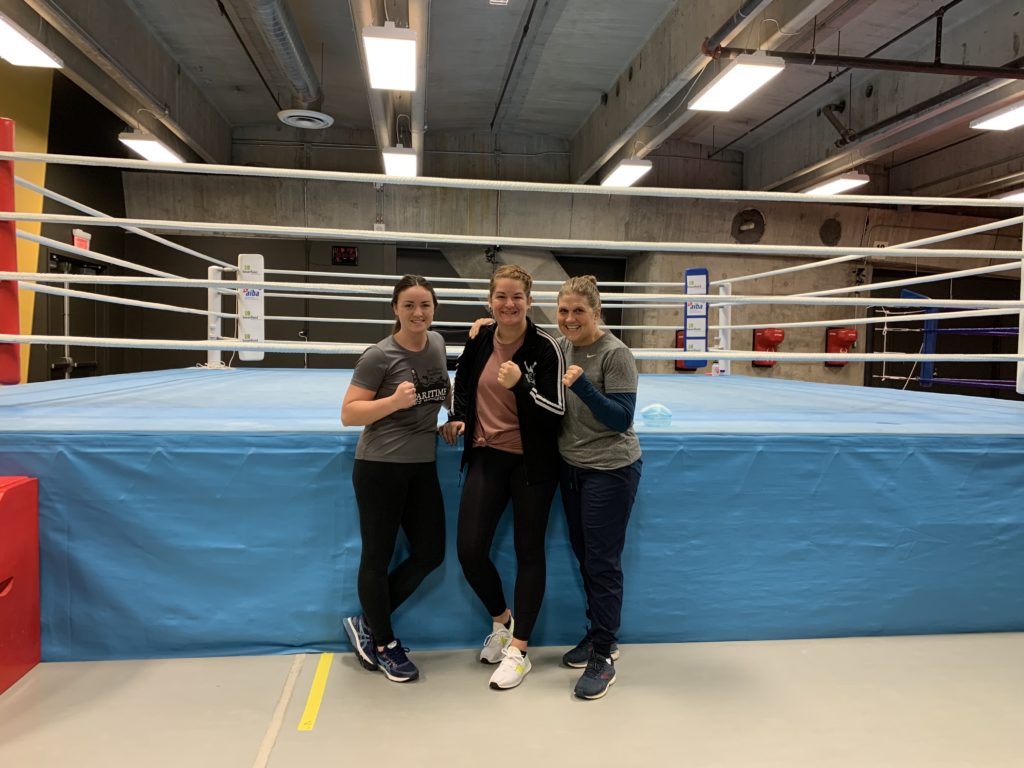 OTTAWA – November 25, 2021. Commonwealth Sport Canada (CSC) announces the launch of its second Commonwealth Women Coach Internship Program (WCIP), which pairs intern coaches and mentor coaches in an initiative designed to prepare more women to assume high performance coaching roles. Inaugurated in August 2020 for three interns and their mentors, the WCIP, which is financially supported by Sport Canada’s Support Program for Gender Equity and Safety in Sport, has expanded to include six interns and their mentors.

The interns, nominated by their respective national sport organizations and selected by the CSC high performance committee, are Jessica Zelinka of Calgary, Alta., an athletics coach at the University of Calgary; Erin MacGregor of MacLelland Brook, N.S., a coach with Albion Amateur Boxing Club in Trenton, N.S., Catharine Pendrel of Kamloops, B.C., co-founder of Pendrel Racing mountain bike team; Sierra Moores of Wingham, Ont., assistant varsity swim coach at the University of British Columbia; Giselle Delgado of Victoria, a Squash BC roving coach; and Lisa Mensink of Calgary, Alta., the head performance coach of the Kronos Triathlon Club.

CSC President Richard Powers said: Equality is a core Commonwealth value, and CSC has a long, strong, and proud history of being gender balanced in its governance and programs, except coaching!” said Powers. “There is a great need to have more Canadian women in high performance coaching roles. We hope the WCIP will help to address this need.”

Sheilagh Croxon, ChPC, of Etobicoke, Ont., returns as CSC WCIP program lead. She has a wealth of coaching experience at all levels of sport in Canada, including an eight-year stint leading the Coaching Association of Canada’s Women in Coaching program.

“I look forward to working with CSC in collaboration with the NSOs to expand this unique program in 2021-22,” said Croxon, who has designed a virtual education program built around providing leadership development sessions featuring women trailblazers in Canadian sport. “We have assembled an exceptional group of intern and mentor coaches who will build positive momentum in Commonwealth sport. By providing intern coaches with the opportunity to gain valuable coaching experience, ensuring their access to leadership development, and developing a strong network of support, I am confident that future national teams will benefit from the inclusion of talented, trained women coaches such as these.”

Jessica Zelinka, a two-time Olympian, rose to international prominence with her fourth-place finish in heptathlon at the 2008 Beijing Games. She was the 2007 Pan American Games gold medallist and a two-time Commonwealth Games silver medallist. Currently the University of Calgary’s track and field and cross country head coach, she has an undergraduate degree from the university and a master’s degree in management innovation and entrepreneurship from the Queen’s Smith School of Business. As a self-employed performance consultant, Zelinka delivers mentorship sessions to athletes, professionals, and veterans and consults on high performance skills. She is a sought-after keynote speaker and a frequent Podcast guest for reputable coaches, therapists, and health advocates.

Erin MacGregor, an accomplished boxer who won 52kg gold and silver medals at national championships, has transitioned into coaching and sport administration. She has over seven years of coaching experience at the club and provincial levels and is being groomed by Boxing Nova Scotia to coach and lead their teams at the upcoming national championships and Canada Winter Games. Since 2015, MacGregor has been working on National Coaching Certification Program (NCCP) for boxing and is an NCCP community leader in fundamental movement skills. She is Boxing Nova Scotia’s vice president-administration and was Boxing Canada’s representative for Nova Scotia to USA Boxing Global Coaching Initiative in 2020. A graduate of the University of New Brunswick, Fredericton, in medical laboratory science, MacGregor is a senior laboratory technologist with Nova Scotia Health.

Catharine Pendrel is an internationally decorated cross country mountain bike athlete whose accomplishments include an Olympic bronze medal, two world championships, Pan American Games gold and silver, and Commonwealth Games gold. A three-time World Cup overall winner, she graduated from the University of Victoria with a degree in sociology and psychology, is Cycling Canada Certification Development-trained, and is a Level 1 professional mountain bike instructor. She is a co-founder of Pendrel Racing, a development mountain bike team that has achieved Canada Cup and U17 and U23 national championship podium positions. Pendrel is president of the Kamloops Bike Rider’s Association and is a rider/mentor with the Clif Pro Team, Pendrel Racing, and the national mountain bike team. She is a published writer and guest speaker at schools and sporting events, sharing her story and experiences.

Sierra Moores has held numerous positions within the sport community, including high performance strength coach with Next Level Performance Training in Cambridge, Ont., assistant varsity swim and strength and conditioning coach at the University of Waterloo (U of W), and currently, assistant varsity swim coach at the University of British Columbia (UBC), where her athletes include several national-level swimmers. Her own competitive career spanned 12 years, first with the Region of Waterloo Swim Club and then with the U of W varsity team. Turning to weightlifting, Sierra began developing her knowledge of strength and conditioning, which she enjoys integrating into her work as a swim coach. A mentor to women athletes and coaches who aspire to a coaching career, she earned an Honours Bachelor of Science degree in kinesiology from the U of W and a Master of Science degree in kinesiology from UBC, and is an NCCP Level 2 coach. Moores worked as a volunteer ESL teacher in Uganda in 2018-2019 (https://serge.org/)

Giselle Delgado, who graduated from Western University with a Master of Science degree and an honours Bachelor of Arts degree, both with a speciality in kinesiology and biomechanics, is a roving coach for Squash BC, covering Vancouver Island. As such she visits facilities to provide coaching and programming advice and to mentor local champions and staff. She is enrolled in the Provincial Coach certification course and is a Canada Winter Games 2023 target coach. Giselle is the sole proprietor of SquashLife (https://squashlife.ca/) and her clients include the Cedar Hill Squash Club. An NCCP certified squash coach, Giselle was the bronze doubles medallist at the 2019 Pan American Games and a two-time gold doubles medallist at Pan American Squash Championships. Chilean-born, she currently plays for Chile’s national squash team.

Lisa Mensink, who has dual Canadian and Dutch citizenship, began her athletic career competing for Canada at national and international competitions. A competitive swimmer from 1987 to 1998, an Academic All-Canadian CIS swimmer, and Olympic Trials semi-finalist, she took up triathlon in 2001 and progressed to the World Cup circuit in 2006. Lisa began to represent the Netherlands in 2007 and competed for that country at the 2008 Olympic Games. She was a professional triathlete until 2012. Today she is an NCCP Competition Development Certified Coach and is the head performance coach of the Kronos Triathlon Club in Calgary. where she trains many developing athletes. Triathlon Alberta has selected Lisa as Team Coach for the 2021 Canada Summer Games in Niagara, Ont.

Carmyn James, a National Coaching Certification Program master coach developer and technical manager of development for Athletics Alberta, brings to her mentorship role over 30 years of experience as an athletics coach, coach developer, and sports leader. Head coach positions include 12 years at the University of British Columbia (UBC)and 17 years at the University of Hawaii. In 1995 she became the first woman to be chosen as a head coach of a national athletics team. James earned a master’s degree in Coaching Science from UBC and is a certified performance coach in jumps, sprints, and hurdles. Her athletes have competed at conference and national championships, NCAA Division 1 championships, and Commonwealth and Pan American Games.

Jill Perry, ChPC, is the president and head coach of the Beaver Boxing Club in Ottawa and a member of Boxing Ontario’s High Performance Committee. She is a former Canadian champion. Perry has a commerce degree from Carleton University and is completing a master’s of High Performance Coaching and Technical Leadership at UBC. She has a background in marketing and worked in High Tech for 20 years.

Dan Proulx, ChPC, recently appointed head coach of Canada’s cycling team after a successful run leading the national mountain bike team, coached Catharine Pendrel, a world champion in 2011 and Olympic bronze medallist in 2016 and numerous World Cup, world championship, Pan American and Commonwealth Games medallists. Proulx, a Level 4 NCCP cycling coach, has a social sciences degree from the University of Calgary, a high performance coaching diploma from the National Coaching Institute-Calgary, and a post-degree professional teaching certificate from the University of Victoria. He coached at Olympic Games in 2008, 2012, 2016, and 2021, and won Petro-Canada Coaching Excellence Awards in 2011, 2014, and 2016.

Tina Hoeben, ChPC, has been the head coach of the highly successful KISU Swim Club in Penticton, B.C., since 1998. She earned a Bachelor of Science (Hons) from the University of British Columbia, a Bachelor of Fine Arts (Hons) from the University of Victoria, and a master’s degree in Visual Art from York University. An NCCP Senior Coach (Level 3) certified, Hoeben is the first ever Swim BC Female Coach of the Year. She has held several team coaching assignments, including the world junior championships, Team BC at the Canada Games, and as men’s coach at the Western Canada Games.

Nicole Pirko has been involved in squash for over 25 years as a high performance player and coach. During her international career, she represented Canada at tournaments all over the world. She is a fully certified NCCP Level 3 coach and is currently the head squash coach at the Pickering Squash Club. Nicole, who graduated from McMaster University with a kinesiology degree, was inducted into the McMaster University Athletic Hall of Fame in 2019. Her citation noted that she was “a dominant figure on the squash court at the OUAA level and achieved conference all-star status in each of her four seasons.” She coached Team Ontario in 2007 and 2011 and has received numerous coaching awards.

Carolyn Murray, ChPC, became a coach after an outstanding 15-year triathlon career that included five straight world championship competitions, the gold medal at the 2008 World Cup, and a top-30 finish at the 2008 Olympic Games. Turning to coaching, she obtained NCCP certification and has been head coach of Canada’s Para triathlon squad since 2014. A kinesiology graduate and a registered acupuncturist, Carolyn has coached around the world at numerous major international events, including world championships and Paralympic Games. Her coaching awards include Triathlon Canada Elite Coach of the Year in 2015 and 2016.