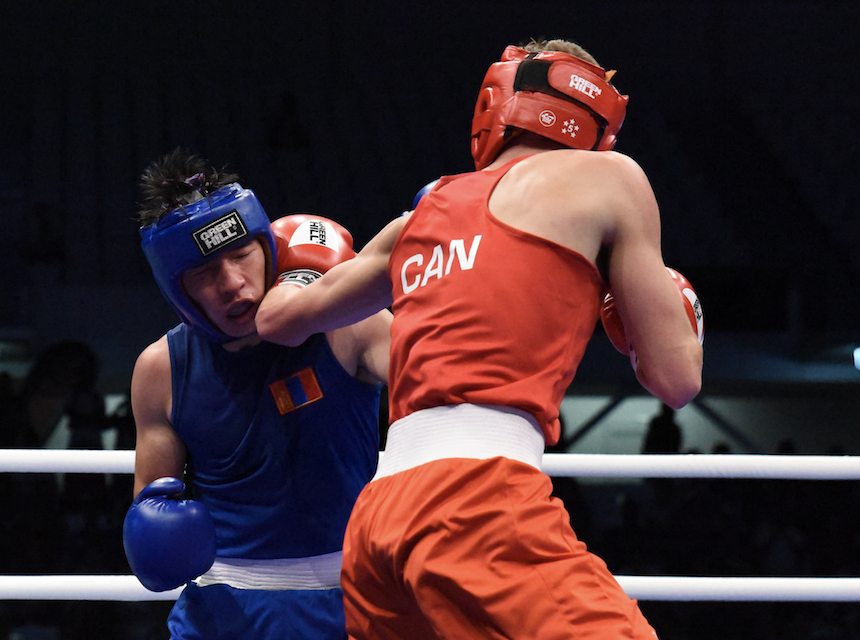 On the second day of competition, Spencer Wilcox was the 1st Canadian boxer to step into the ring at the Youth World Championship. For this first bout, the 60 kg Canadian boxer was facing Tulga Oyunbaatar from Mongolia, an orthodox boxer with 95 bouts to his resume. Although his opponent cumulates more than double his bout experience, Wilcox came out victorious in this 4-1 split decision in the first round of the preliminary.

“It was a good bout right from the starting bell. I lost the first round but once I found my rhythm in the second round, there was no stopping me! I fight with all my heart, which is something you can’t teach. I didn’t care about losing the first round, I made some necessary adjustments and kept pushing until the last bell,” stated Spencer Wilcox upon exiting the competition venue. “I didn’t train this hard to participate in this tournament, I came to win! Thank you to every one back home and at Boxing Canada for the support. On to the next one !”

Now moving to the second round of the preliminary, Spencer will be back in action on Friday, August 24th during the afternoon session where he will face Ankit Kumar from India.

As for the remainder of the Canadian team, here is an overview of when they are expected to make their debut on the world stage:

69 kg Charlie Cavanagh vs winner of TUR vs POL

For more information on the competition and the progress of the Canadian delegation, visit our Event webpage for all details.