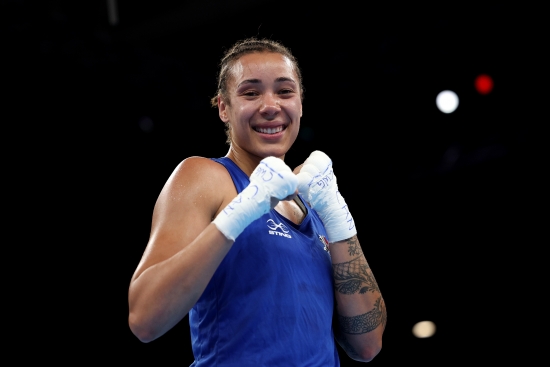 Aug 7, 2022 – There were high hopes for the Canadian boxing team at the 2022 Birmingham Commonwealth Games. In the end, they did not disappoint with a four-medal performance highlighted by Tammara Thibeault’s gold medal.

Coming into the Games, Montreal’s Tammara Thibeault was one of the gold medal favourites. Thibeault, who won the 2022 World Championship, began her tournament against Hepseba Angel (CAY). This was a mismatch as Thibeault earned three standing eight counts in the first round to force a referee stoppage.

In the semifinal, Thibeault matched up with Caitlin Parker (AUS). While it was closer, than her opening round match, and did go the distance, Thibeault took the win by unanimous decision.

The gold medal was a showdown with Rady Gramane (MOZ). From the onset, Thibeault was in control of the match. She earned a standing eight count in the second round and won the bout by unanimous decision. Afterwards, Thibeault spoke about what winning the gold meant to her. “I don’t have the words to describe how this feel,” said Thibeault. “This is more than the Commonwealth Games, this has been a long and challenging year, full of great moments and this marks the end of my competition season in 2022. I am so proud of what I and my team have accomplished. We have been though some rough patches and we have become more resilient. I walk out of these tournaments better than I came in and I am so proud of myself and my team.”

Thibeault also explained what she thought was the difference in the gold medal match. “I think my experience and everything I have been working on came together. Samir (El-Mais, Team Canada Coach) and I have been working in the gym day in and day out. We have fought over things, I have cried over things but today everyone got to see the work we put in. These are the big moments that people see, but they don’t see all the small moments in the gym that makes this happen.”

Winnipeg’s Priyanka Dhillon began her competition in the quarterfinal against Christine Ongare (KEN). Both fighters were busy in this one, but Dhillon was ahead after the first two rounds. Ongare went all out in the third round, but it didn’t phase Dhillon, she won by split decision (4:1).

Dhillon advanced to the semifinal to face Nitu Nitu (IND). It was close early on, but Dhillon would get tagged with big shots in the second and third and took the loss by referee stoppage. With the semifinal loss, Dhillon earned a bronze medal.

“Overall, this has been a great experience,” said Dhillon. “I came in wanting a medal, I got a medal, that is exciting. It is not the medal I was hoping to get but it is a medal regardless, so I can’t be too disappointed. The gameplan today was to be aggressive and move a lot, I did move a lot, but she ended up getting the win.”

Montreal resident Wyatt Sanford was the first Canadian to compete. Sanford had the largest field in the 63.5kg weight class. In his round of 32 match, Sanford opened with a win over De Niro Pao (NIU) after a referee stoppage in the second round.

He was back in action just two days later against Qhobosheane Mohlerepe (LES). This one did go the distance with Sanford taking it by unanimous decision.

That earned him a quarterfinal match with Joshua Tukamuhebwa (UGA). It was a close bout and Sanford even suffered a cut. However, he battled through and won by split decision (4:1).

In the semifinal, Sanford drew Reese Lynch (SCO). Unfortunately, this was where Sanford’s run came to an end, losing a unanimous decision. While it was not the colour he wanted, Sanford still picked up a bronze medal.

“I feel like I started too slow in that semi final bout, I was too patient,” said Sanford. “I should have had a more intense and higher volume fight because he was a slick outside boxer. I had a hard time finding my distance. I will see him (Lynch) in the future and learn from my mistakes. This was a good competition, I can’t be too disappointed in myself, three wins and a bronze medal, I am happy with that.”

Keoma-Ali Al-Ahmadieh, from Montreal, got started with a round of 16 match against Charles Senior (AUS). After some early feeling out, Al-Ahmadieh took over in the later stages and earned a split decision win (3:2).

In the quarterfinal, he squared up with Keevin Allicock (GUY). This was a close fight for the first two rounds, but Al-Ahmadieh finished strong with a great third round to win by split decision (4:1).

“I felt comfortable in the ring. I was happy with how I stayed calm throughout the whole fight. It wasn’t a busy fight, but it was more strategic and about executing the gameplan. I knew he was tired (in the third round), I didn’t want to force anything, so I let him come to me and that was it.”

Unfortunately, due to a medical issue the morning of the semifinal, Al-Ahmadieh was forced to withdraw. Still, with his two wins he earned a bronze medal.

Keven Beausejour, from Montreal, opened his tournament with a round of 16 match against Charles Cox (BAR). Beausejour controlled this one from the beginning and earned a unanimous decision.

He advanced to face Sean Lazzerini (SCO). This was tough test for Beausejour, and he ultimately took the loss by unanimous decision, ending his tournament.

Montreal’s Jerome Feujio’s first fight of the Commonwealth Games was against Ifeanyi Onyekwere (NGR). Unfortunately, Feujio just didn’t do enough in this one and dropped an unanimous decision.