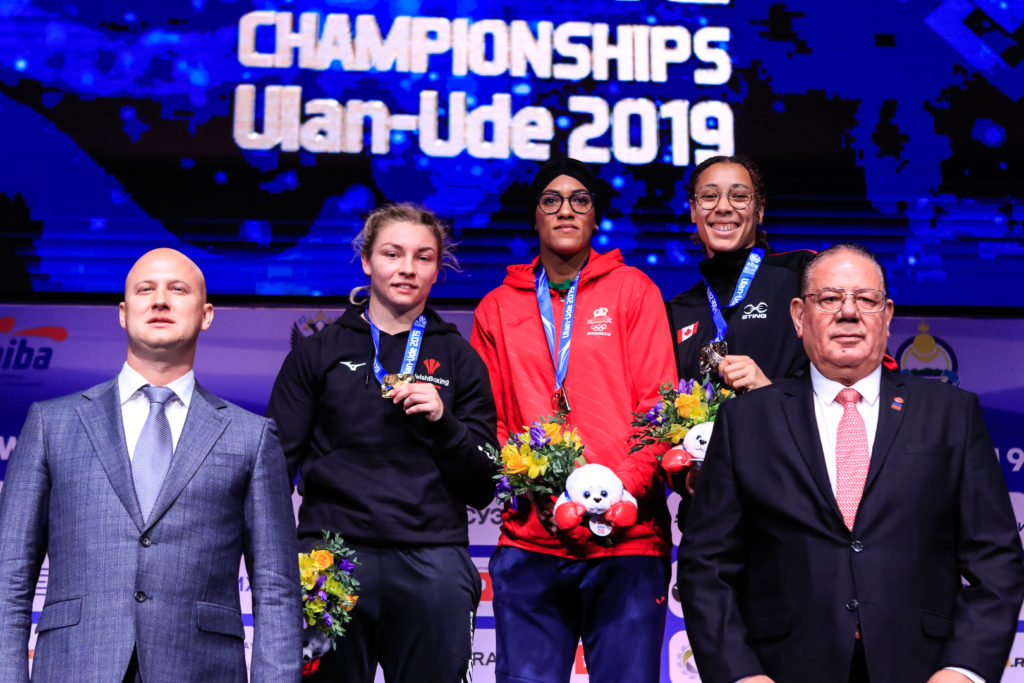 After ten intense days of competition, the 2019 edition of the Women’s World Championships came to an end in Ulan Ude, Russia. The championships regrouped 213 boxers from 57 nations across all ten weight categories.  Here’s a recap of the competition for the four athletes who represented Canada on the world stage:

Seeded #8 in the championships, Tammara is the Canadian boxer who’s made it the furthest in the competition, claiming bronze at her 2nd participation in the world championships. Tammara began her progression with a bye in the first round of the competition followed by two victories: firstly a unanimous win over Sarah Scheurich from Germany followed by a 3-1 decision against the American Naomi Graham, which guaranteed a medal for the Canadian southpaw.

For her semifinal bout, Tammara had a big challenge ahead of her as she was squaring off against #1 ranked boxer in the middleweight division, Nouchka Mireille Fontijn from Netherland. Despite giving her all, Tammara lost a 1-4 split decision, therefore claiming the bronze medal in thee 75 kg category.

” Overall, I’m happy with my performance. I’ve adjusted to my opponents throughout the tournament and although I didn’t win the semifinal, I’ve learned a lot from this fight. I belong in the top of the world ranking and it will only improve from here. I wouldn’t have been able without my team by my side. I’m lucky to live this experience and it’s only the beginning!”

Caroline Veyre was the first Canadian to break the ice at the World Championships after obtaining a bye during the first round. For her first bout, Caroline squared off against Tianna Guy from Trinidad and Tobago. Her game plan was to keep her distance by using her jab, which she was happy with the execution, and easily claimed the unanimous win.

With a few days off before her following bout, Caroline was back in the ring on October 8th against Yodgoroy Mirzaeva from Uzbekistan. The bout was more physical than technical and Caroline came out on the wrong side of a 4-1 split decision.

” It was not a pretty fight, my opponent destabilized me with a lot of clashes. I wasn’t able to make the bout more technical with clear shots, there was too much pushing and I wasn’t able to adjust.”

Despite losing in the 3rd round of the preliminary bouts, Caroline believes her experience  will be beneficial for the upcoming qualification events for the Olympic Games.

“It’s important to see other boxing styles that we don’t see often, like the boxers from Asia. Boxing is evolving a lot and we need to adjust accordingly. I will learn from my experience here at the World Championships.

Irene made her debut in the world championships on Sunday, October 6th against Shih-Yi Wu from Chinese Taipei. It was the first bout for both boxers after obtaining a bye in the first round and Irene’s game plan was to cut her distance and force her opponent to get out of her comfort zone. However,  Irene lost a very close decision (2-3) against her opponent.

” I really felt ready for my first world championship and I was very happy to take part in a competition of this scale. I had a tough opponent who had a lot of international experience so I was happy to be able to square off against someone of this calibre.”

Myriam was the last Canadian to enter the tournament after a 6-day wait. It was the 2nd time she had to manage such a wait prior to entering a competition (she also had to wait for a week before her debut at the Lima 2019 Pan Am Games), which can be challenging for the weight management and daily physical activation.

Seeded #5 in her category, Myriam kept her focus and felt ready when it was time to step into the ring against Christina Desmond from Ireland. In yet another physical dual, Myriam had some difficulties to produce a 2nd attack and lost by uanimous decision against her Irish opponent.

” From my point of view, my performance went well but at times, I was caught off guard by her strength, not of her punches but her physical power when I was trying to cut her distance. I’m not used to this rowdy style but I will need to find a solution as many bouts ended this way throughout the championships. I will most probably have the opportunity to do some sparring with different athletes from various countries in order to make the most of this experience. It’s not every day that we have the opportunity to be in Russia with more than 60 countries.”

The 2019 Women’s World Championships were no longer a qualifying event for the Tokyo 2020 Olympic Games, but it remains an important tournament to assess the competition for the upcoming events while gaining valuable experience.

For all documents relating to the World Championships (draw sheets, results, statistics, etc.), consult our Event Webpage for all details.