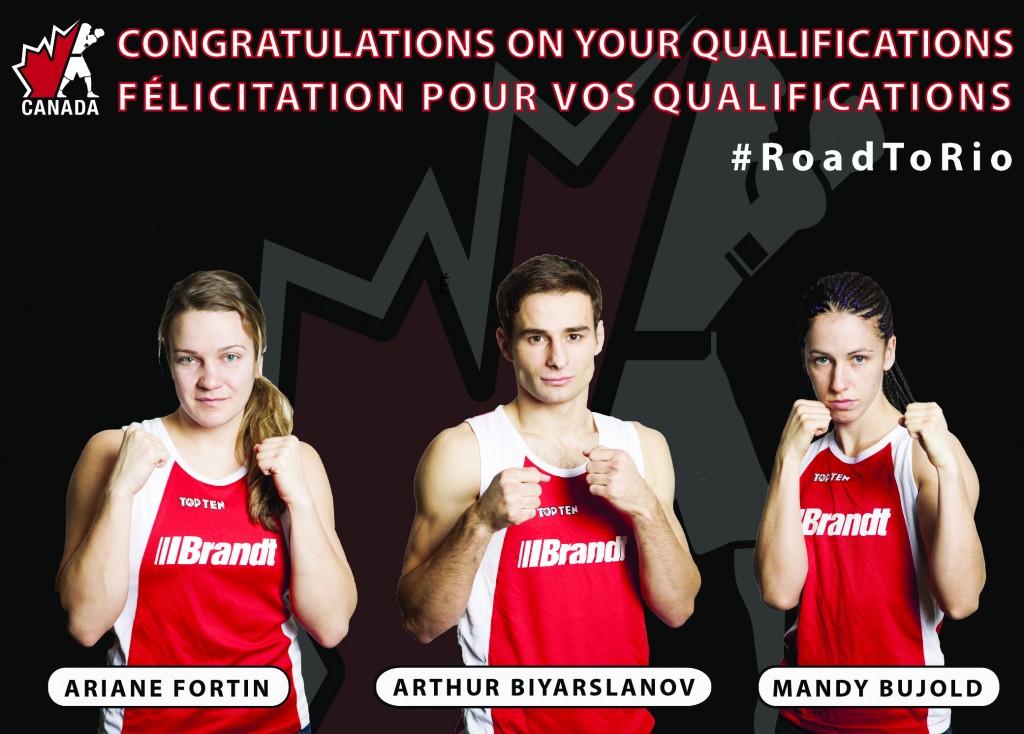 After nine days of intense competition, the American Olympic Qualifiers have finally come to an end. Thirteen boxers were representing Canada during the competition. Throughout the tournament, every boxer performed well, but only three athletes were able to punch their tickets for the Olympic Games.

Mandy Bujold (51kg) was the first Canadian to qualify for the Olympic Games. Mandy was the favorite in her weight category and she easily advanced throughout the tournament. Being a 2-time Pan American Games champion, Mandy has been working very hard to get where she is now. “It still doesn’t feel real.”, said Mandy after her unanimous win in her final bout. Looking back on the tournament, here is what she had to say:

This tournament was more than just an Olympic qualifier for me, it was the biggest step in my career thus far. On Thursday afternoon, when the official decision was announced, I couldn’t help but think back on all the hours, days and years of training and dedication that went into this. Throughout my career I have always worked very hard in the gym and my coaches would always tell me “Your hard work will pay off” but after a while I started to question when it would ever pay off… However, the moment my hand was raised on Thursday afternoon, it paid off! This event was my chance to take the next step in my career and to have the opportunity to box on the World’s biggest stage. When I stepped into that ring I fought for myself, my coach, my family, my team, my community, my sponsors and my Country.

Ariane Fortin was the 2nd Canadian to secure her spot for the Olympic Games. Having missed her chance at the 2012 Olympic Games, the Quebec athlete was determined to participate this year. “The feeling is so hard to describe! As much as I was convinced that I would qualify, it seemed unreal when it happened! It’s so many mix emotions at the same time: excitement, extreme joy… and relief as well! ” Ariane left with the silver medal after being defeated in the final bout by American Clarissa Shields, who is ranked #1 in the world and won the last Olympic Games. “For me, this is a celebration of my perseverance over the last few years.”

The competition started late for Arthur Biyarslanov (64kg), but it did not stop him from qualifying for the Olympic Games. Being the #1 seed in his weight category, he obtained a bye in the first round and had his first bout on the 6th day. He easily advanced from one round to another, and after 3 wins in 3 days, Arthur walked away with his ticket to Rio and the gold medal.

” The competition started late for me so I had to keep my mind sharp and not get distracted by anything. I came here with one focus and that was to win gold and qualify for Rio 2016. I felt ready.”, mentioned the athlete. “I want to thank my coaches Chris and Steve who have prepared me to be at my best for this tournament. We have been working for 5 months now and everything came along really well!

After more than 8 years of training, Arthur is finally on his way to live his Olympic dream.

David Gauthier (60kg) came very close to qualifying as well, after a spectacular win in the quarterfinals. He unfortunately had to abandon during the semifinals due to an injury and was unable to box for the bronze and final spot for the Olympics in the 60kg category. David feels more confident than ever going forward with the next qualifying events. ” I would not know what to say about my injury beside the fact that these things can happen… However, my confidence and my mindset looking back at this tournament assure me that I belong amongst the best and there is nothing that can stop me from going to the Olympics, besides myself.  I won’t settle for the bronze medal next time! ” said David upon his return to Canada.

With 241 athletes from 34 countries, the qualifications were only offering a slim quota of 25 male boxers and 5 female boxers who would qualify for Rio 2016.

“We are very proud of our team! For the most part it’s a young team and our experienced members did what they needed to do. We are still hoping to qualify a few more boxers at the last couple of qualifiers. The future looks bright for Boxing Canada.” said Pat Fiacco, president of Boxing Canada.