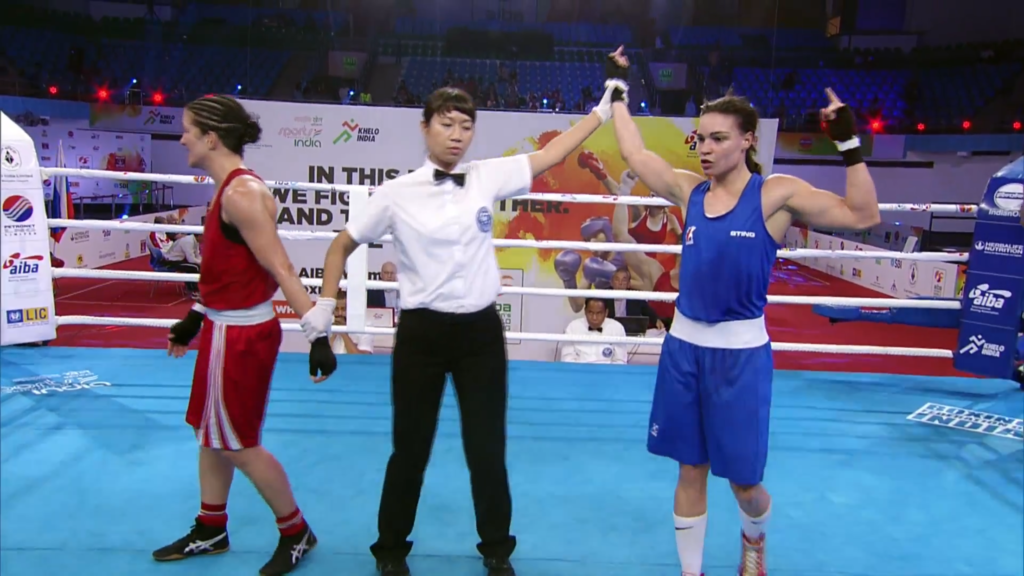 At the conclusion of the 5th day at the 2018 Women’s World Championships, Caroline Veyre, Myriam Da Silva and Tammara Thibeault have secured their spot in quarterfinals and have reached the Top 8 in the world. Midway through the competition, these boxers are getting closer to the podium in their respective categories as there’s only one victory separating them from the medal round. Here is a recap of the Canadian performances during the last round of the preliminaries:

On Sunday, Caroline was entering her 3rd bout in four days of competition, and for this fight, she was facing Denitsa Yordanova Eliseeva. Despite her offensive strategy, the Bulgarian boxer ranked 7th in the world wasn’t able to mesure against Caroline’s defence and good movement in the ring. The Montreal boxer was in control of the exchange, which granted her an unanimous victory. Caroline will now square off against Kellie Anne Harrington from Ireland, an opponent she has already met at the 2017 Celtic Cup.

“For my next bout, I’ve already met my opponent before. She had won a split decision during a tournament in Ireland, in front of the local crowd, but this time I intend to have my regagne. The more I progress in the tournament, the more I make adjustments and my next bouts will be event better. I know I can win the quarterfinals.”

After a very physical first bout, Myriam Da Silva faced off agsainst Shakanova Yonusova, a southpaw boxer from Uzbekistan. Despite a little bit of pre-bout jitters, Myriam followed the game plan well and strikes a few powerful blows to her opponent that seem to hurt her.

” Although I’ve often trained with World caliber southpaw boxers, such as Ariane Fortin, it always causes a little bit of stress. It is not negative, it just makes me more cautious. The bout wasn’t perfect from a technical standpoint, but I had fun in the ring. “

With this convincing 5-0 victory, Myriam cumulates a second win at the World Championships and reaches the quarterfinals against the #1 seeded boxer, Nien-Chin Chen.

” For the next bout, my approach remains the same: one thing at the time. For now, I am in recovery mode and tomorrow we will conduct an analysis of the upcoming fight. Every bout brings me closer to the podium, which is my objective! I will work hard and give my best, because it is what I love to do.”

Following her convincing first win against the #4 boxer in the 75 kg category, Tammara Thibeault competed against  Chei Kenneally from New Zealand this morning. Being ranked #5 in the world, Tammara quickly imposed her rhythm and won the dual by unanimous decision.

” I am very happy of my bout today. I’ve boxed better than on Sunday and it is my plan for tomorrow too. At the moment, I’m not thinking about a medal. I’m rather focusing on my performance, because that’s what will take me to the final. Now, I am resting and enjoying the victory and we will start the process once more tomorrow to perform well in quarterfinals. “

For the quarterfinals, Tammara will be facing the Rio 2016 Silver medalist, Nouchka Mireille Fontijn who is currently ranked #1 in the world.

All quarterfinals are taking place November 20. Here are the Canadian performances to watch:

For the three other Team Canada boxers, their pathways in the competition have unfortunately come to an end of the weekend.

With a by for the first round and a 4-1 victory during her second bout, Sara Haghighat-Joo bowed out by a unanimous decision against southpaw boxer,  Grazieli Jesus De Sousa from Brazil. However, Sara remains optimistic about the futur holds for her.

” Representing Canada at the World Championship is an honour in itself. This is definitely not the outcome I came here for, but it is my first year at 51 kg, an a popular Olympic weight class. I now know what to expect and I will come back stronger. I’m still very new on the international stage and it is only the beginning. I’m looking forward to what the next 365 days is going to look like for me! “

In the 57 kg weight division, Sabrina Aubin had a tough first bout to enter the competition as she had to square off against the #1 ranked boxer, Junhua Yin from China. Despite her excellent physical and mental preparation as well as a great control of the exchanges, the Canadian came out on the wrong side of a very tight 2-3 split decision against Rio 2016 Silver medalist (60kg).

” I dominated the ring, I provoked attacks and I gave clearer punches. I was very active and agressive to be the most dominating, patient and strategic boxer of the bout. I did everything I had to do to win and I thought I had it, but the result was different. As always, I take the positive out of the situation. My opponent was #1 in my category and tonight I was the most efficient and complet boxer in the ring. I leave with my head high, knowing my performance was worthy of the World Elite. We always learn from our losses and I will come back stronger without a doubt. “

Marija Curran was the last Canadian to make her debut in the tournament during the 4th day of competition. Unfortunately, Canada’s 81 kg representative lost a unanimous decision against Chinese boxer Lina Wang.