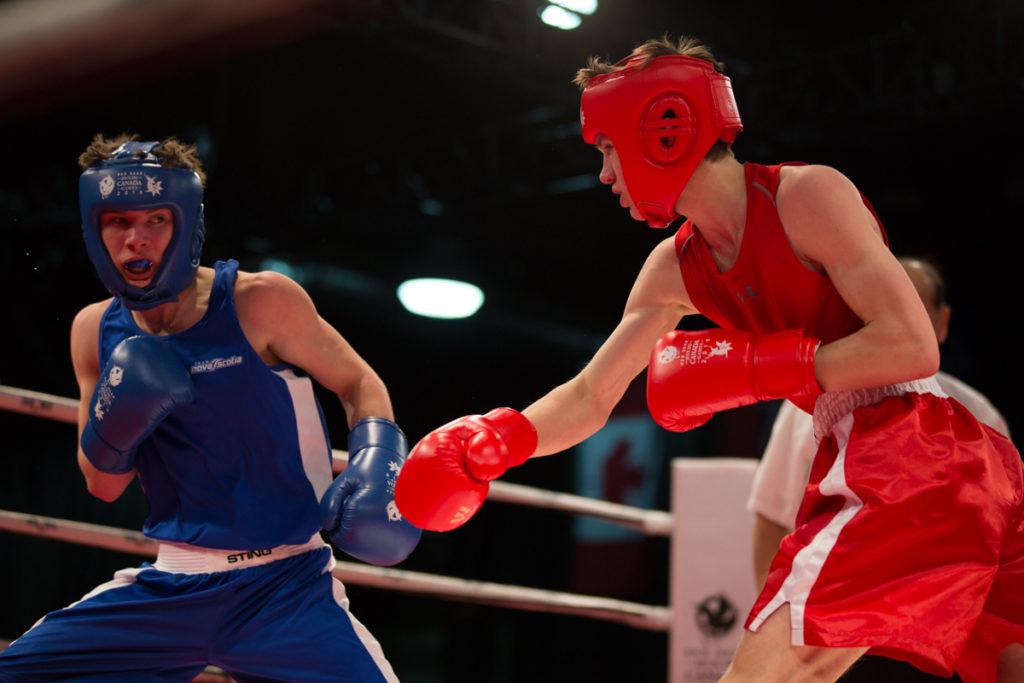 On the second day of the boxing competition, 17 bouts were scheduled on the card, including 12 semifinals to determine who would compete for the gold medal. Boxers gave their all in the ring in order secure their spot on the podium of their respective category. Here’s a recap of the performances on day 2 of the competition:

In the bantamweight division, four boxers squared off to secure their spot for the gold medal bout. The first bout of the evening featured Avery Martin-Duval from Quebec and Jawad Miakhail from Manitoba. Martin-Duval, who had obtained a bye in the first round of the competition, took the win by unanimous decision on his debut bout at the 2019 Canada Winter Games.

The second 56 kg bout of the evening opposed Alberta’s Cole Brander and Nova Scotia’s Matthew Fraser. With a height advantage over his opponent, Cole Brander won the semifinals with a 5-0 score from the judges, defeating the 49 kg Youth National Team representative.

Quebec’s Avery Martin-Duval, who is also a Youth National Team boxer, is now set to face Cole Brander from Alberta in the gold medal bout on Wednesday evening.

BC’s Brayden Sims and Quebec’s Jad Khabbaz faced off in the first semifinals bout of the lightweight category. Brayden Sims stopped his opponent in the second round, securing his spot for the gold medal bout.

“That fight felt amazing! I went in with a lot of confidence although I was a little more nervous because Quebec boxers are very slick. It was hard to get around his powerful right hand, but I was able to stop him in the second round, mentioned Brayden Sims after his victory. “Now I can’t wait for the final, I am so happy.”

The second boxer to punch his way to the final was Justice Harborne from Manitoba with a Referee Stop Contest (RSC) win over Kyle Oliver from Alberta. The final between British Columbia and Manitoba will take place Wednesday evening.

Meanwhile, Jad Khabbaz (QC), Kyle Oliver (AB), Wayne Ducharme (SK) and Christopher Lucas Craston (ON) are still on the running for a bronze medal and will be on tonight’s card to determine who will advance to the next round.

After obtaining a bye the previous day, Sammy Morisset (QC) and Jerome Leroyer (BC) made their debut in the competition in the semifinals round. Morisset claimed the win by unanimous decision and will meet Nova Scotian Alex Bulgaru in final after the latter defeated Ontario’s Mason Galvao with a 4-1 split decision in his favor.

Jerome Leroyer and Mason Galvao will square off on Day 3 (February 19) to determine who will advance to the bronze medal final against Nicholas Callahan from Newfoundland and Labrador, who already secured his spot in the final in a split decision victory against Alberta’s Fausto Santoro.

The first faceoff in the 69 kg weight category opposed Mohamad Hariri from New Brunswick to Kyle Leon from Ontario in their debut bout of the 2019 Canada Games. In a unanimous decision of the judges, Ontario grabbed the win and advances to the final on Wednesday evening.

“I felt good about my first fight. I’m now going for gold to bring it back to my province, stated Ontario’s boxer, also nicknamed La Sombra, in his post-bout interview. It’s my first Canada Games so I’m excited.”

The second finalist of the welterweight category is Christopher Guerrero Zuri. The Quebec boxer defeated Dylan Clark-Erlandson from British Columbia in a 5-0 score card. The boxing rivalry between Ontario and Quebec continues as the two finalists will fight for gold on Wednesday evening.

Despite their defeats, New Brunswick’s Mohamad Hariri and British Columbia’s Dylan Clark-Erlandson will stepped into the ring on Day 3 to determine who will reach the bronze medal final against Matthew Ross from Nova Scotia.

After obtaining a bye in the preliminary round, Matthew MacDonald entered the competition on the second day against Mohamed Zawadi from Ontario. After winning by stoppage against Manitoba on Day 1, Zawadi once again stopped his opponent and was declared the winner.

“I feel good about a stoppage in the first round of the semifinals, stated Mohamed Zawadi, who is also the 75 kg Youth National Team representative. Now, on to the next one, the final on Wednesday!”

Medicine Hat boxer Janick Lacroix will be facing Zawadi in final after winning by unanimous decision in semifinals against Jonathan Hannah from BC. In 2018, Lacroix was the 70 kg Junior Canadian Champion while Zawadi was the 75 kg Youth Canadian Champion; it’s a final not to be missed as the two champions will now face each other in the same age category!

Meanwhile, Mohammed Makhlouf (NB) and Matthew MacDonald (NS), as well as Jonathan Hannah (BC) and Estéban Nadeau (QC) will square off on Tuesday night to determine who will fight for bronze in the finals.

In an action-packed semifinal bout, Gabriel Tremblay from Quebec entered the tournament against Tiago Balteiro from Ontario. In a close decision, it was Ontario that was declared the winner and advances to the big finally of the competition. He will be joined by Isaiah Haya from New Brunswick, who won unanimously against British Columbia, to determine who’s the champion of the light heavyweight category at the 2019 Canada Games.

On the bottom half of the draw sheet, Seamus O’Brien (NL), Gabriel Tremblay (QC), Quinn Neald (SK) and Brayden Markin-Hellekson (BC) will be on day three’s card in the hopes to reach the bronze medal bout on Wednesday evening.

After two days of competition, here are the twelves boxers who will fight for gold in their respective category on Wednesday night:

The boxers will box for the bronze medal who will be determined on Day 3 of the competition. For more information regarding the boxing competition, consult the 2019 Canada Games’ official website or Boxing Canada’s event page for all details.