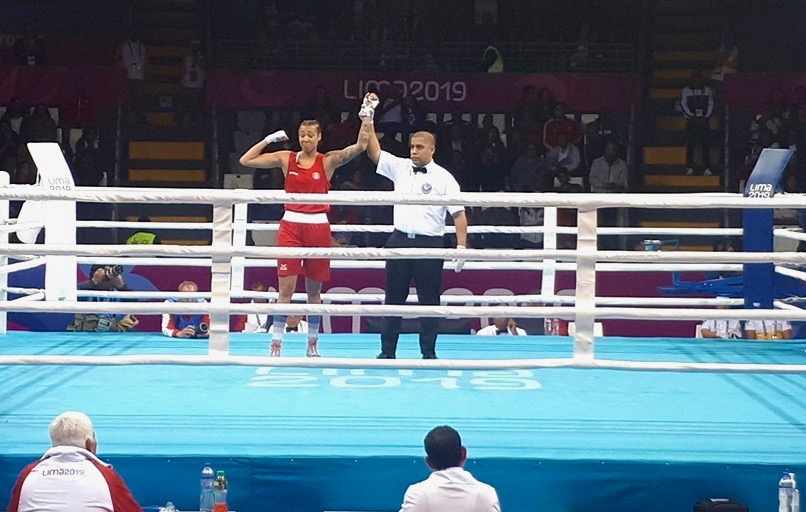 After three days of intense competition, the boxing quarterfinals wrapped up on Monday evening at Lima 2019 Pan Am Games. Regrouping 117 qualified boxers from 23 countries, the boxing competition saw 57 exciting bouts since Saturday and 5 out of the 6 Canadians have already made their debut in the tournament.

Despite great performances from the Canadian delegation, Tammara Thibeault (75 kg) is the only boxer who won her quarterfinal bout and advances to the next round of the competition. She will be joining her teammate Myriam Da Silva (who had obtained a bye and will make her debut in the Games today against Mexico) in semifinals and both boxers have secured a medal for Team Canada!

Here are recap of the quarterfinal performances from Team Canada:

Sabrina Aubin was the first Canadian to step into the ring during session 1 of the at the 2019 Pan Am Games against Yeni Arias Castañda from Colombia. The two boxers had previously fought each other in the final of the 2017 AMBC Continental Championships where the Colombian boxer won gold with a 4-1 split decision over the Canadian.

This rematch was a very physical bout where a lot of punches where exchanged during all three rounds and Sabrina had to adjust her game plan throughout the bout. Ultimately, it was Castañeda’s hand that was raised in an even closer 2-3 split decision.

“The Colombian is an experienced boxer; I had a big fight ahead to start the competition and I knew I was ready for it. The decision could have gone either way and it was my opponent who won by split decision today. It was a good and close fight that looked more like a final than a quarterfinal, a great performance!”

For his opening bout, Harley-David O’Reilly squared off against Brazil boxer Keno Machado, a boxer he had never opposed as he was still a Youth boxer until last year. Despite showcasing great defensive skills, Harley-David lost by unanimous decision to the 2018 Youth Olympic champion.

“I’m a little disappointed that my tournament came to an end of course; I came here to win a medal but it didn’t go as I would have wanted. I made [my opponent] miss a lot, but I was unable to convert my defensive strengths into counter-attack and I wish I would have done more. You cannot buy experience, you can only acquire it and I continue to work hard and learn from these moments. We will go back in the gym and put in the work needed to .”

Bryan Colwell had a tough opponent to start off the competition as he was scheduled to face the 2017 World Champion Erislandy Savon from Cuba. The two had already squared off this past March during the quarterfinals of the 2019 Pan Am Qualifiers in Nicaragua, where the Cuban boxer won the bout by unanimous decision and went on to win 1st place in the heavyweight division.

In this rematch, the Cuban made used of his impressive reach and won the bout by a unanimous decision of the judges.

“I’m very happy with my performance, it was way better than the last fight had and I made serious improvement considering I had no fight and only 1 month uninjured since Nicaragua. I have much better footage to work with now and I know he didn’t wanna trade with me, and he definitely didn’t want any of my left hook anymore.”

For her opening bout, Tammara Thibeault didn’t waste any time in the ring against her opponent from Guatemala. Both boxers had already faced each other earlier this year in the semifinals of the Independence Women’s Cup in Dominican Republic where the Canadian southpaw boxer won by unanimous decision and went on to win the gold medal in the 75 kg weight category.

The rematch didn’t go the distance at the Pan Am Games, and Tammara was declared winner by Referee Stop Contest after 90 seconds during the first round.

“It was my fastest bout ever. I started off strong and my opponent dislocated her shoulder so the referee stopped it. I wasn’t too sure what happened at first, but I spoke to her afterwards to make sure she was okay and to wish her a quick recovery, mentioned Tammara Thibeault in the mixed zone upon exiting the ring. The boxing venue is wonderful and the tournament is well-organized, and I’m glad I got to experience my first bout event if it went by quickly.”

In her opening bout, Irene Fiolek was facing Dayana Erika Sánchez (ARG), the 2017 AMBC Continental champion. The two boxers had never met before and gave their all during all three rounds. In a very close decision of the judges, it was the Argentinian boxer who was declared the winner with a 3-2 decision in her favour.

“I’m disappointed of the decision. I spent too much time analyzing my opponent in the first round, which cost me precious time, and I should have thrown more combinations from the start. Overall, I’m really happy to take part in a Major Game and to represent Canada at the Pan Am Games.”

For Day 4 of the boxing competition, Myriam Da Silva will make her debut in the tournament against Braida Cruz Sandoval (MEX) during the afternoon session (starting at 2pm Peru time) while Tammara Thibeault will oppose Jessica Paola Caicedo Sinisterra from Colombia during the evening session (stating at 6:30pm Peru time). Already guaranteed a medal, the two Canadians will be fighting for a place in final!

For more information (draw sheets, schedule, results, etc.), visit our Event webpage for all the details.